“There is one good thing to come from the nuclear war of words between North Korea and the US: people are realising what they had largely forgotten since the end of the cold war, that our extinction could be one insult away. . . . Bertrand Russell put it best in his anti-nuclear weapon manifesto, published jointly in 1955 with Albert Einstein, in which he wrote: ‘You may reasonably expect a man to walk a tightrope safely for ten minutes; it would be unreasonable to do so without accident for two hundred years.’ . . .” 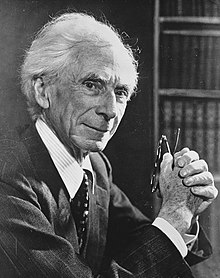 Bertrand Arthur William Russell, 3rd Earl Russell, OM FRS[65] (18 May 1872 – 2 February 1970) was a British philosopher, logician, mathematician, historian, writer, essayist, social critic, political activist, and Nobel laureate.[66][67] At various points in his life, Russell considered himself a liberal, a socialist and a pacifist, although he also confessed that his sceptical nature had led him to feel that he had “never been any of these things, in any profound sense.”[68] Russell was born in Monmouthshire into one of the most prominent aristocratic families in the United Kingdom.[69]

. . . Russell was a prominent anti-war activist and he championed anti-imperialism.[72][73] Occasionally, he advocated preventive nuclear war, before the opportunity provided by the atomic monopoly had passed and he decided he would “welcome with enthusiasm” world government.[74] He went to prison for his pacifism during World War I.[75] Later, Russell concluded that war against Adolf Hitler‘s Nazi Germany was a necessary “lesser of two evils” and criticised Stalinist totalitarianism, attacked the involvement of the United States in the Vietnam War and was an outspoken proponent of nuclear disarmament.[76] In 1950, Russell was awarded the Nobel Prize in Literature “in recognition of his varied and significant writings in which he champions humanitarian ideals and freedom of thought“.[77][78]